Preparing for Your 3MT 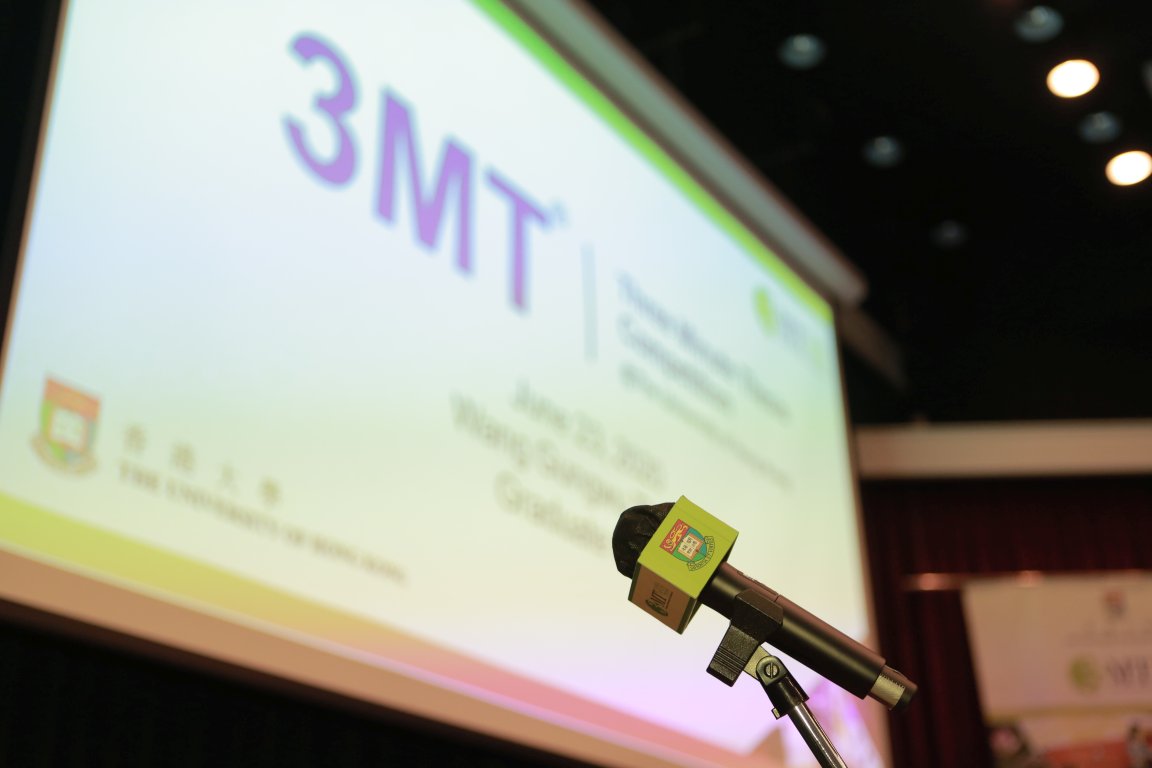 Simon Clews is the Director of the Melbourne Engagement Lab at the University of Melbourne. He has judged at the Trans-Tasman 3MT semis and finals, and conducted training to many 3MT candidates in different countries. Below is a list of videos where Simon offers tips, tricks and techniques he has gained from judging 3MT all around Australia and training students all over the world, covering five topics from effective communications skills to producing a stunning slide:

I am a student from a non-technology-related discipline. If I participate in 3MT, will I be disadvantaged when I am competing with students from technology-based disciplines?

No. Adjudicators are invited from both non-technology-related and technology-based disciplines. Media persons are also invited to serve on the adjudicating panel as far as possible. Adjudicators will be briefed about the Judging Criteria of 3MT for all candidates.

I am going to submit my thesis early but I will probably submit my “Notice of Intent to Submit a Thesis” after the 3MT this year. Am I eligible to participate in 3MT this year?

As stated in the Eligibility Criteria, PhD/MPhil/PD students who are not in their final year of study but have already submitted the “Notice of Intent to Submit a Thesis” are eligible to register to enter the Competition.
If you cannot meet this requirement but have justifiable reason(s), please contact Knowledge Exchange Office (keoffice@hku.hk) to discuss your case.

I am not sure if presenting my thesis at the 3MT may pose an issue on data sensitivity. Should I still participate?

Interested students should discuss with their research supervisors before registering for the Competition. As part of the registration procedures required by the organiser, the primary supervisor must confirm his/her support of the student’s participation in the 3MT and that he/she has no objection to the content of the student’s presentation. Students without such endorsement by the specified deadline are not allowed to enter the Competition. For further questions on submission of the supervisor’s endorsement, please contact Knowledge Exchange Office (keoffice@hku.hk).

What if my research supervisor serves on the adjudicating panel? Can I still participate in 3MT?

Yes, you can participate. In such circumstance, your presentation will not be marked by your research supervisor to avoid possible conflict of interest and your total score will be divided by the total number of judges minus one, before comparing with those of other candidates.

Are there any Intellectual Property Rights guidelines that I should be aware of when preparing the 3MT slide?

Due to the nature of the Competition, any data or information presented or discussed in the Competition should be considered information that will likely enter the public domain, for example, in media coverage, in subsequent University publications for the public in print and /or digital formats, and/ or on the University’s websites, etc. Interested students should discuss with their research supervisors before registering for the Competition.

What is allowed on the candidate’s 3MT slide?

Short DescriptioOne single static PowerPoint slide is permitted. In preparing the slide, remember that “less is more”. It does not have to include text. Visual cues are equally, if not more, effective in helping the audience understand your research. However, no slide transitions, animations or “movement” of any kind may be used. Please refer to “Presentation Rules” for details.

Do I have to put my personal information on the slide for the adjudicating panel to identify me?

No. The organizer will prepare a “title slide” for each candidate including the candidate’s name, faculty, degree registered and the presentation title. This “title slide” will appear before his/her video and own single slide is shown.

Can I use a presentation title in layman’s language other than my thesis title to facilitate my presentation?

Yes, you can. Please specify your presentation title in layman’s language when you submit the finalized slide to the event organizer. No amendments to the slide, including the presentation title, will be accepted after the specified submission deadline.

Do I have to use a slide?

Yes, you are required to prepare a single static PowerPoint slide. Please refer to “Presentation Rules” for details.

Can sound or video be used during a presentation?

No additional electronic media (e.g. sound and video files) is permitted during a 3MT presentation. Please refer to “Presentation Rules” for details.

Can additional props be used during a presentation?

Can palm cards or speech notes be referred to during a presentation?

Yes, palm cards and/or speech notes are acceptable; however this option may detract from the delivery of the 3MT and is not recommended.

While candidates can’t deliver their 3MT as raps or songs, can they quote from a poem or song?

Raps and song lyrics are not permitted to be used to present the entire 3MT. However, quotes from a poem or song, to a limited extent, may be included if they are relevant and very significant to the presenter’s thesis topic.

What happens if my presentation is longer than 3 minutes?

If a candidate’s presentation exceeds 3 minutes, he/she will be automatically disqualified.

Can I win more than one category of prizes?

Yes, it is possible to win a place (champion, the 1st runner-up or the 2nd runner-up) and win the Online People’s Choice Award.

Is there a dress code?

Business casual attire is suggested. Please be reminded that NO COSTUMES in whatsoever form are allowed. Please refer to the “Presentation Rules” for details.
As the videos will be uploaded for voting of the Online People’s Choice Award, you may wish to avoid wearing clothes with complicated patterns such as checks, tight/close stripes, herringbones, tweeds and loud plaids, which tend to strobe on camera.

What is Asia-Pacific Competition?

The 3MT Competition was launched by The University of Queensland, Australia, in 2008. Enthusiasm for the 3MT concept and its adoption in numerous universities led to the regional Trans-Tasman 3MT Competition, first held at UQ in 2010. In 2016, the Trans-Tasman 3MT Competition was expanded to include a select number of Asian universities and renamed as Asia-Pacific 3MT Competition.
Depending on the arrangements of the organizers of regional/international 3MT competitions, we will again try to arrange for a candidate of the HKU 3MT, who meets the eligibility criteria set by the organizer concerned or hosting institution, to represent HKU at a regional or international 3MT competition. It may be a virtual competition rather than one that is held overseas. In case where the hosting institution or organizer concerned only allows PhD candidates to participate in its competition, the highest ranking PhD candidate may be given the chance to represent the University in that competition.

Universitas 21 (U21) is the leading global network of research-intensive universities, for which member institutions are comprehensive universities providing a strong quality assurance framework to be the network’s activities. Each participating U21 member university will select a local winner who will then be put forward for the U21 Final, to be judged by an international panel consisting of industry and academic professionals. The Grand Final will be a virtual event where video entries rather than live presentations will be judged. For details, please visit here. The HKU representative will be selected among the winners by the Graduate School.