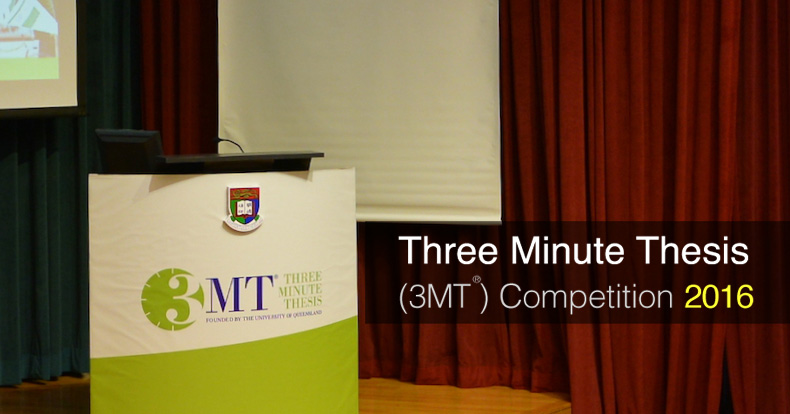 As a researcher in education, the intense conflict emerging in Hong Kong society has triggered my eagerness to share my research to more audiences. 3MT has definitely provided me the best platform to accomplish my goal. Indeed, delivering le crème de la crème of a thesis in only a few words has always been a difficult task, but it’s also a good way of training, especially when the target audiences are non-specialists. More importantly, the preparation process for the 3MT has helped me to better conceptualize my thesis. Last but not least, I want to express my sincerest gratitude to my primary supervisor, Professor Wing-wah Law, my significant other, Dr Zhuo Deng, and all of my friends and colleagues. My goal could never be accomplished without their long-term support and inspiration.

Champion and People’s Choice Award Winner
Ms Xiaoxin DU
PhD, Education
The 3MT participants have always inspired me with their fabulous speeches and outstanding research findings. Watching the 3MT videos has been one of the most enjoyable leisure activities to me over the past years as it can broaden my horizon with knowledge from different disciplines within just minutes! I have never thought of myself to be a good speaker. I just enjoyed talking with people. There have been moments when I have to explain my research and current interesting studies to friends who are not from academia during meal gatherings. Watching the 3MT competitions has prepared me well to casually talk to anyone anytime about my research in layman’s language and in an interesting way. I went to the competition as if I were just entering into another casual chat with friends, trying to enjoy my time chatting with the audience and other contestants. This is my second time joining the 3MT competition and my second time to be ranked the top 3 among the finalists—I am grateful that my usual talk with friends about my research could be recognized and resonate with the audience and judges, in just 3 minutes!

1st Runner-up
Mr Ricky Van Yip TSO
PhD, Social Sciences
When my friends and relatives asked me about my research work in the past, I found it challenging to explain it clearly and concisely without using too much jargon. The 3MT competition provided me an excellent opportunity to learn how to extract key messages from a wealth of research findings, as well as to deliver my ideas to non-specialists in a clear and interesting way. It was extremely rewarding to hear that people found my research work interesting and meaningful after my 3-minute talk. I must thank my friends and colleagues for spending their time to listen to me and give me suggestions for improving the presentation. Most importantly, I would like to express my deepest gratitude to my supervisors, Professor Richard Saunders and Dr Chun Chiu Pang, for their guidance, support and encouragement in this competition and throughout my 4-year study.

2nd Runner-up
Ms Yuen Yung LAU
PhD, Science
The idea of presenting your research in 180 seconds to a non-specialist audience was very exciting, to a speaker, and also to a listener! As a speaker it was very challenging to condense four years’ research into three minutes; you need to brew the ideas for a long time to make your speech more flavorful. I am extremely delighted to reach out and share my research with so many people. I must say that each research postgraduate should take up this challenge to bring out the best in themselves and their research; it is an amazing experience. I am very grateful to my family, both in Hong Kong and in India, for their support during and before the competition, to my supervisor, and to all those who saw my video and liked it.

Registration Deadline: 6pm on Friday, January 8, 2016 (No late registrations will be accepted.)

A briefing session was held for RPg students who are interested in participating in the HKU 3MT:

A training workshop was held for candidates of the HKU 3MT 2016:

Videos of Candidates and Awardees

Members of the public, colleagues and students are cordially invited to vote for the most engaging presenter for the Online People’s Choice Award via YouTube until 1700hrs, March 17, 2016. You can vote for any one of the finalists below. The finalist with the most “LIKE” votes on YouTube will be awarded a book voucher of US$130.

The Three Minute Thesis (3MT®) Competition 2016 of HKU was successfully held on March 8, 2016. This year 32 research postgraduate (RPg) students participated in the competition, and 10 finalists were shortlisted to compete for 3 prizes decided by the adjudicating panel and the People’s Choice Award decided by audience ballot. The Online People’s Choice Award was awarded to the finalist who received the most ‘LIKE’ votes on YouTube after the competition.

The 3MT was developed by The University of Queensland, Australia in 2008. It is an academic competition that challenges RPg students to explain their research within 3 minutes to a general audience. 3MT celebrates the discoveries made by RPg students and encourages them to develop the skills to communicate the importance of their research to the broader community.

Professor Peter Mathieson, President and Vice-Chancellor of HKU, officiated at the final competition. Ms Belinda Hung, Co-founder of Hung Hing Ying and Leung Hau Ling Charitable Foundation and HKU Court member, and Dr Allan Wong, Chairman and Group Chief Executive Officer of VTech Holdings Limited and Chairman of the Board of Management of Versitech Limited of HKU, served on the adjudicating panel as external members. Internal members of the adjudicating panel included Professor John Bacon-Shone, Associate Director of the Knowledge Exchange Office (KEO), who served as the Chairman of the panel, Professor Ying Chan, Director of the Journalism and Media Studies Centre, Professor Ying Shing Chan of the School of Biomedical Sciences, Professor Lena Wong of the Faculty of Education, and Professor Ben Young, Associate Dean of the Graduate School.

Congratulations to all the winners of the HKU 3MT Competition 2016. They are:

“If you want to translate your research or innovation into real impact on the world, you have to make it accessible beyond academic publications. You have to make it readily understood by potential funders and partners, the media and the general public. Even if your innovation has the potential to become a successful start-up or a multi-billion project, you have to be able to explain it concisely when pitching to angel investors and venture capitalists. The 3MT skills are therefore invaluable to you,” Professor Peter Mathieson says.

The HKU 3MT Competition was jointly organized by the Graduate School and KEO. 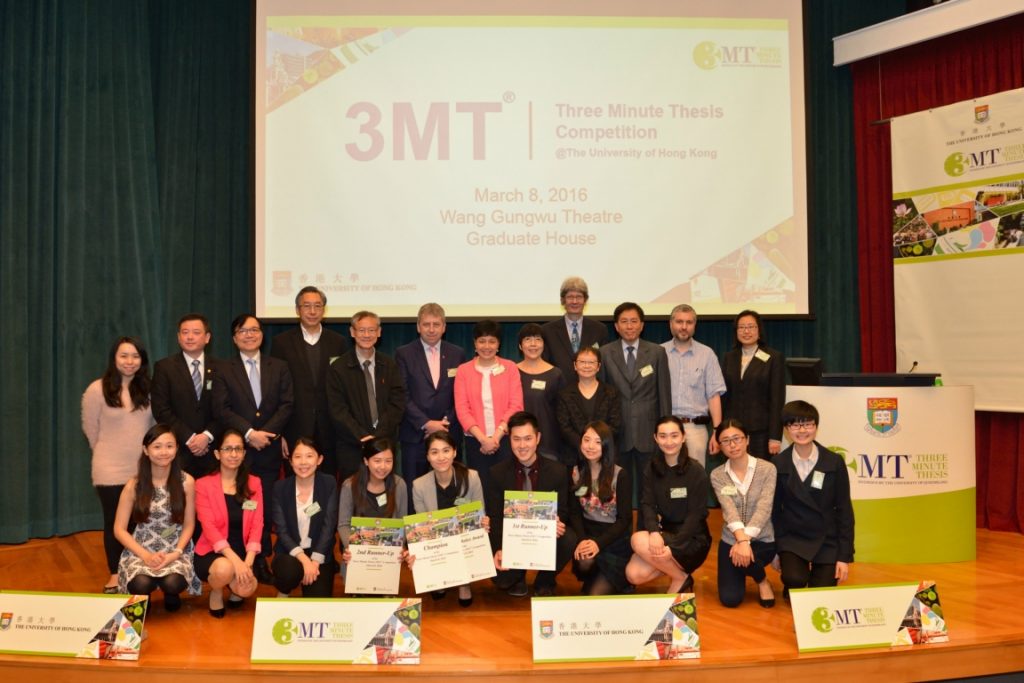 Awardees, finalists and supervisors at the HKU 3MT Competition 2016 with President and Vice-Chancellor Professor Peter Mathieson and members of the adjudicating panel

The 2016 Asia-Pacific 3MT Competition was held on Friday, September 30, 2016 at The University of Queensland (UQ), Brisbane. Doctoral students representing 50 universities in Australia, New Zealand and Asia competed in this competition.

The HKU 3MT 2016 Champion and winner of the People’s Choice Award, Ms Xiaoxin DU, PhD candidate in the Faculty of Education, represented HKU in the 2016 Asia-Pacific 3MT Competition.

See the pictures shared by our HKU representative: